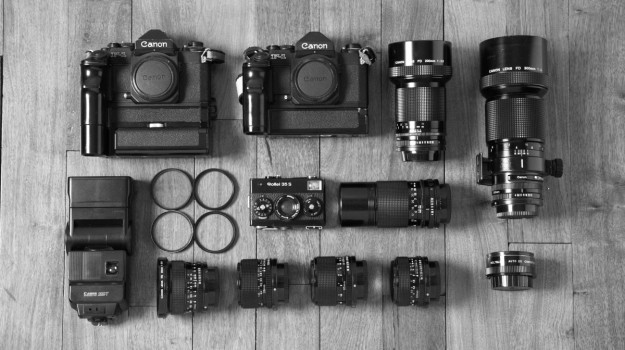 Sometimes, I look at this collection with tears in my eyes. Yes, I still have this kit, not exactly in mint condition as it has been bumped around quite extensively over the past decades, but nevertheless fully functioning! The F1 bodies were tanks, literally indestructible (if you are interested in some history, check out the 50 Years of Canon SLRs). Battery flat? Not an issue, you removed the battery,  guessed exposure and continued shooting! And the cost? I bought my first F1 body back in the early 80s, when it was THE professional camera at the time (well, if you shot on Canon, I know there is another camp out there).  I remember the price being slightly above 1 000 Deutsch Mark, so roughly speaking EUR 500. .. about a tenth of the price of the current Canon flagship model EOS 1DX.

As I move out of professional photography in the early 90ties, I didn’t make the move at the time to the new EOS system after it had been introduced in the late 80s (25 Years of EOS System), and continued to happily shoot on the set of F1 New bodies and a range of FD prime lenses (20mm f/2.8, 28mm f/2.0, 50mm f/1.4, 85mm f/1.8, 200mm f/2.8, 300mm f/4) until about 2007 when I relocated to South Africa. After I returned from a trip to the bush with some 30-odd rolls of film (when shooting bursts at high speed, you could exhaust a complete roll in about 6 seconds), I basically decided to go digital. However, this is another story.